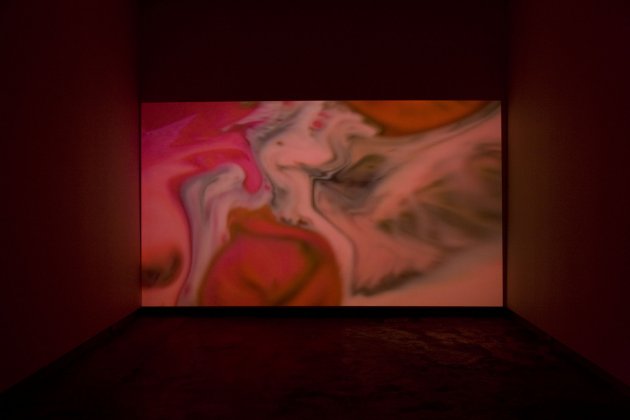 Colour, if Tradition speaks the truth, once for the space of half a dozen centuries or more, threw a transient splendour over the lives of our ancestors in the remotest ages.

Entering any space where Beata Geyer’s work has been installed is a disorienting, mythical experience. One cannot view the work and expect to remain on stable, geometric ground. Colour, having escaped as a rhythmic amoeba cloud, seems to have grown along floors, around columns and up walls, reaching a balance with, and taking over, the architectural geometry of colourless corners, lines and planes.

It seems surprising to see so many colours laid out, not according to the “primaries” of modernist thinking nor by the universal colour wheels and “palettes” that still haunt the thinking of contemporary artists and architects, but according to an intuitive, sensual and joyous feeling of coloured space. The surprise is that this use of colour is both architectural geometry and artistic colour at the same time, as if there never had been a reason to separate geometry and colour in the first place.

Geyer paints standardised fibreboard panels with colours selected from commercially available paint manufacturers’ colour charts. The painted panels are then presented on the interior surfaces of buildings or as two- or three-dimensional constructions. When assembling the works, the position of each coloured panels is chosen not through some over-arching composition but by the relationship of one panel to the next, with perhaps only some reference to panels further away. The question each time is, “does this colour go next to this one,” rather than “does it represent a concept?” This makes the array organic, emergent or “becoming,” which is in contrast to architectural composition that is by necessity almost always compositional.

Within this simple description there lies a complex web of cultural history in which the stakes are high and the outcomes important. To explain such importance, abstract terms are needed, such as “subjectivity,” “plastic reality” and “contructivism,” which have subtle yet imposing effects on the viewer and the reception of the work. Constructivism, perhaps the most important condition for Geyer, concerns the integration of pictorial space with “real” space thereby ending the distinction between architecture and painting. The use of such terms and their ideas have a history, one in which Geyer has been immersed. Her personal background includes both architecture and theoretical studies in art in both Poland and Australia. Her interest in Russian and Polish Constructivist artists, such as Katarzyna Kobro and Wladyslaw Strzeminski, has lead to an interest in spatial form and how form is related to colour. The main idea of Kobro and Strzeminski is “Unism,” in which the concern of art is with spatial interaction and interior unity rather than with aesthetically unique and isolated exterior objects. While Geyer is clearly operating with this idea in mind, her use of colour goes beyond the red/yellow/blue “primaries” of Katarzyna Kobro and her approach to form is beyond that of Strzeminski’s, with his insistence on “flatness.”

For Geyer, form is not the architectural kind, in which form is the same as shape. For historical and practical reasons, architectural form is equal to shape in order that it can be represented and thence subject to critique. But painting does not need this kind of critique so that, for Geyer, form is like a cinematic process where movement has moments of intensity that mark its progress, where there is a beginning and an end, interweaving and ambiguity between feeling and meaning, but also where form provides freedom from the boundaries of the known, the narrative or the concept. For this kind of form, uncoloured linear architecture can only provide the space, not create it. Geyer’s coloured form grows during the installation process into the shape of a gallery and fills it with sly contradictions and movements that merge with the building so that the clear stillness of architectural representation is opened up, but in such a way that is much more fun, more alive and surely more fecund than geometric space. As such, as Geyer says, the work is…

…based on a dialectical model: a confrontation between the fixity of architectural form and colour itself, which is uncontained, uncontrolled, not fixed and most of all irrational.

This confrontation is also a subversive relation. Geyer has made coloured spaces that supplement architectural space. The feeling of entering such a space is precisely the supplementary effect that Jacques Derrida so famously discussed, in Writing and Difference and Of Grammatology in the 1960s and yet because the colour is so powerful, it takes over the space, even making the architectural points, lines and planes seem secondary, literally enfolded in colour. This tells us of the familiar idea deconstruction which leads to the many interests of philosophical deconstruction such as feminism, metaphysics and politics and yet because the work is such a sensual experience, it has the full and disorienting, playful effect that deconstruction had when it was new. This is not a deconstruction of language, but one of the precepts of space.

Thus there is no satisfying subjectivity, whether it is architectural, artistic, historical or philosophical, before such works. There is only a strange liberating dislocation or wondering about what is exactly before one’s body and what is called up from one’s body, such is their joyfulness.