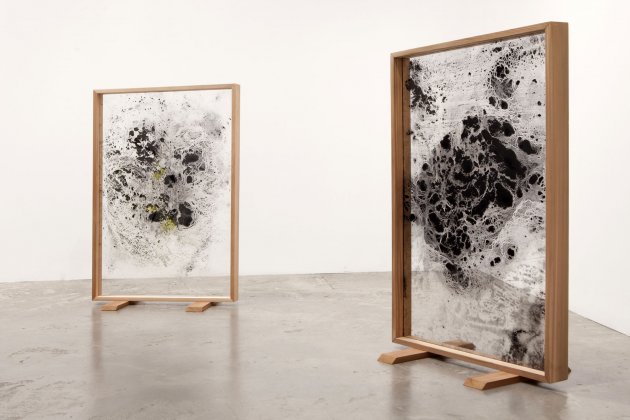 The title says it all and we have almost nothing to say about it. Finally we can leave all of our words behind by choosing to embrace this singularity common to everyone. Everything from this point on in this work shall be over-loaded. We give to you pulsating fields of dust and matter, earth and sky, sun and moon and two devices that are said to be able to restore balance back in to the local environment. We also give you the sound of protean noise from which the ecstatic lightning bolt shatters the swarm, into the Z of creation.  Haines & Hinterding, 2012

BREENSPACE is pleased to present Orgasm by David Haines and Joyce Hinterding, an exploration of one of the most fundamental experiences in a stridently non-literal way. This most private of acts common to everyone and yet inexpressible is at the same time over-coded by a total excess of images, expressions and meanings. In a world of endless mediations and translations what could signal more effectively a kind of wasteland of empty gestures and little deaths at the same time as belonging to the most intensely profound form of pleasure.

The artists see in this complicated nexus, an opportunity to experiment with such a loaded subject in another way. They want to try to somehow go into the dark interior of this singularity, in order to try to uncover its fields and vibrations. For them the meaning of this exploration is to try to uncover a plane of expression that exemplifies creatively, the life of this impulse in a flash of energy release.

In earlier works, they have created odes to a maverick psychoanalyst, Wilhelm Reich (student of Freud) who introduced to the world the unlikely combination of orgasm therapy and ‘orgone energy’ an unproven cosmic force. Reich’s discovery included the invention of devices that are said to be able to harness and manipulate this energy, in order to restore balance back into natural systems such as the human body or clouds. Two of these devices, known as ‘Cloudbusters’, appear in this exhibition, faithfully built to the original design, they are said to be able to blast holes in clouds and restore balance back into the local meteorological environment and, notably, Reich used these devices to fight extra-terrestrials in the 1950s.