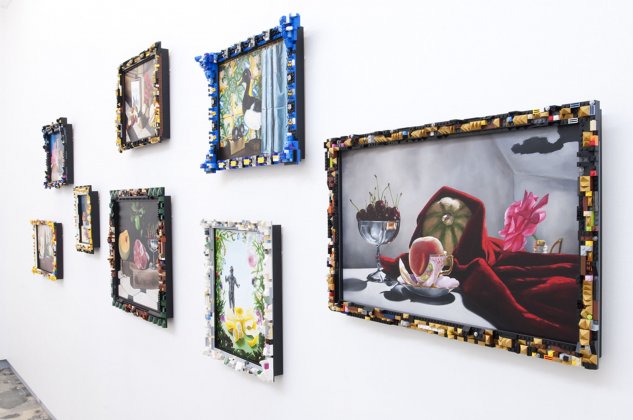 For her solo exhibition at BREENSPACE entitled Double Dutch, Monika Behrens created a suite of paintings, developed while on residency at the Cite Des Arts Internationale, Paris.

Double Dutch is an exhibition of paintings that imply physical tensions – carving, balancing, hovering, binding and shadowing. The title for the show is taken from the skipping game in which two ropes are turned in opposite directions, relating to the underlying focus of the works on political relationships between bordering countries in Europe.

The paintings are bordered with Lego to resemble the decorative gilt frames of the still life tradition. The frames, as carefully considered as the paintings compositions, play an important conceptual role in conveying the artist’s ideas about painting as constructions that can be taken apart and reassembled, like alliances and borders between countries.

Motifs from history, popular culture and childhood are employed to seduce the viewer into considering the paintings deeper socio-political significance. Behrens explores relationships between anxiety, control and power using humour that provokes an audience’s sense of imagination.