Sally Smart | In her nature 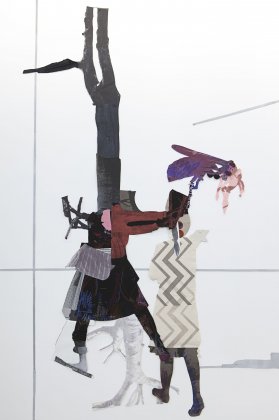 Sally Smart Zig-Zag, for Herzog (In Her Nature) 2010–11 synthetic polymer paint on canvas and fabric, oil pastel on velvet, paper and other collage elements

On the morning of my thirty-fourth birthday I badly twisted my neck and spent the rest of that day holding my head in my hands, since my neck was refusing to support it, and I discovered in the process the surprising heaviness of the human head – not unbearable, no, I wouldn’t go that far, but not entirely bearable either. At some point I had my daughter Google the average weight of a human head (I could not do it myself, you understand, since my hands were busy with my own specimen). No more than 5.5 kilos without hair, apparently; eight per cent or so of a human body’s entire mass. Doesn’t sound like much, does it?

I was not, it must be said, in acute physical pain. If anything my predicament was laughable. All my limbs and faculties were in working order, yet I was as good as – unless we include the time-honoured occupation of crushing grapes with bare feet to produce wine – incapacitated. One awkward, rushed movement of a just-woken-up body and five seconds later I was a woman beholden to her neck, less (so much less) than the sum total of my parts. I spent that whole day – one of the strangest, most unsettling birthdays of my life – both laughing at the utter ridiculousness of it all and weeping over the utter ridiculousness. Then I went to sleep, unsure what kind of person I would be in the morning, which parts of me would refuse to join up or gel, what bolts and screws might go missing in the night.

Yet it all felt familiar. I knew this feeling. Every first-generation migrant knows it well. How many of us step out of our houses in our new countries, having sticky-taped our heads to our necks and our hearts to our pericardium sacks, and walk around slowly, fearful that parts of us may start falling off, as if we are cheaply manufactured toys prone to spontaneous disassembly?
The kind of self that emerges out of the experience of being uprooted – by war, disaster, immigration – can only find a true home inside a body that knows how to be in pieces.

Cognitive scientists tell us there is such a thing as ‘The Extended Mind’, the sort that spills out of our heads and hooks up with objects and beings in the world to form a single continuum of thought and perception. But what of The Extended Body (if there is no such term, we must invent it)? What of a body that does not end where the world begins but instead carries bits of that world with it, like crumbs of bread tangled up in a beard, like tiny particles of sand behind the big toe; a body that glows with what philosopher Edward S. Casey calls ‘an active immanence of the past’? Lodged deep inside it, powerful and alive, are not stories of what once was, so much, not even sensory archives, but pieces of past worlds – pulses, rhythms – pieces inaccessible to the conscious mind.

And if it is bodies that carry round these fragments of worlds, worlds pulled out from under them like rugs, what kind of new home – what kind of shelter – can be found for bodies, for people, like this?

For years after my family’s arrival in Australia, I was fixated on all those around me who did not think twice about being at home – so utterly natural did it feel to them. I looked at them as you would look at a different species, not with envy, not with anger, but with an intense and almost anthropological curiosity. (I would have put them under a microscope if I could.) There seemed to be no violent disconnect between these people’s Umwelt (their subjective self-world) and their environment, and the miracle of these two worlds matching up felt, to them, neither remarkable nor tenuous. The rest of us, we migrants, exiles and refugees, were like mermaids put onto the surface world – we could walk, of course, even stride if need be, but every step, especially in the beginning, hurt as if daggers were being pierced through our feet. Home was no longer something natural, an entitlement, an extension of ourselves, and in its absence our bodies carried the double weight of both remembering and forgetting where we came from and who we actually were.

Every day you choreographed your way in and out of your body. Some days, overwhelmed by grief, or made to face your own intractable strangeness, you would retreat to it in haste, as if to a shelter after an air-raid siren. Other times, convinced there was nothing else for it, you would push yourself beyond your body’s familiar habits and rhythms – you’d push European skin under Australian sun and go for an afternoon walk – to learn how to be, and breathe, in the new world.

‘Although we struggle for rights over our own bodies,’ says Judith Butler, ‘the very bodies for which we struggle are not quite ever only our own.’
On the morning of my thirty-fourth birthday I badly twisted my neck and spent the rest of that day in the grip of a feeling I’d once known so well. I had almost forgotten it. It was the feeling that comes upon you when the most natural of things that has previously demanded little thought or attention – the nexus between my neck and my head, for instance – suddenly falls apart. And as I cried while my daughter wasn’t looking over the randomness of it all, and over my own helplessness, both farcical and temporarily dire, and over how birthdays no longer mean anything anyway, I realised something. It was the recognition – self evident to people in pain, banal to the enlightened among us, startling to me – that our bodies answer to no chain of command but are culminations of the vital and grave interdependence of all their constituent parts, all the fragments and layers, all the bits and bobs.