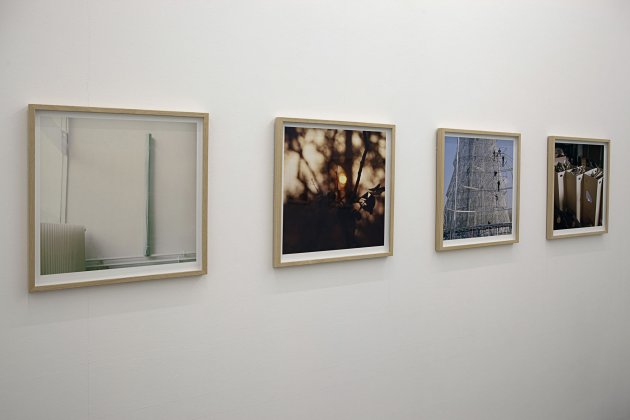 Poetry is a messy thing. A messy, messy, messy thing. On some collective, intuitive level it’s familiar enough, and like hard-core pornography, while we may not be able to precisely define it, we all know it when we see it. But once we scrape away its fluid and contingent parameters, we are left with the strange sight of language attempting to overcome itself, sitting on the frontier beyond which it is no longer language; poetry is the Word at its furthest reaches. What happens when poetry falls over this precipice and ceases to be of language? In most cases it becomes, simply, phenomenological existence; everyday lived life. However, every once in a while, it becomes a particular sort of visual utterance. Vanila Netto’s Solace gives meaning and value to this form.
In nine photographs serialised on the walls of BREENSPACE, Netto runs through a handful of settings, allusions, poetic associations, political manifestos and psychological observations. We are never told to do anything; Netto is too polite for that. Instead, we jump-cut voluntarily from modernist utopian architecture and all that it invokes (think Brasília’s government buildings, Paris’ La Défense district, hippie communes), to manmade objects at once familiar and unfathomable, to intimate portraits of humans doing inexplicable, yet deliberate acts. Then there’s the Romance: the trees, the sunsets, the mountains... It is in this constant shifting from interior to exterior, midday to twilight, human subjectivity to nature morte that a cinematic narrative is drawn, doing that magical thing that cinema does: opening worlds in the spaces between the images. And here a story emerges: There’s a world and it is seemingly limitless and beautiful. We as inhabitants, make things. Buildings and art and collections of sticks segregated according to some unknown taxonomy. That’s what we do. Where does this lead us? Are we lovingly imitating the world or appropriating it shamelessly? What is our fate? Judging by the downcast and inert expressions of the actors, it looks all messed up.
But unlike conventional cinema, Solace does not let you fall victim to the subjectivity of the narrative. You are with the artist here; don’t forget it. This is what she is looking at. This is what has caught her eye. These are her concerns. Then, in a lovely little act of compositional violence, Netto breaks the photographic sequence by sandwiching it between an etching and a neon sculpture. Here the links to cinema come to a definite end and the true poetry begins. The etching is of the cover of The Whole Earth Catalog, a document of the counterculture movement of the late 60s and early 70s. It is a guide for self-sufficient living: how to hunt, how to self-medicate, where to buy supplies to make a Geodesic dome to house your multiple wives and children… By reproducing this potent artefact of the recent past in the form of an etching, Netto is toying with a delicious metaphor. We have here a toxic chemical image making practice, without which the electronic circuit board would not have been born (thus ushering in the electronics revolution of the 20th century), depicting the birth of a utopian movement whose concerns were ecological and anti-technological in focus.
And then, on the other end of Solace, we have The Artist as Luminous Source, a neon spiral as long as the artist is tall. Since the first decade of the 20th century, noble gasses charged with high voltage have meant that capitalism’s gentle nudging doesn’t cease when the sun sets. The neon light in modern culture, through its ubiquitous presence in advertising, has always implied newness, the promise of novelty, and of The Future (albeit a conception of The Future that now belongs to the past). This extensive symbolism remains in Netto’s use of the medium. Indeed, throughout the entire work, there is a unifying thread: we were once excited about the future, but now, as it begins to look less peachy, it scares us to no end. Is it “reality” that soured the visions of utopia, or have the failed utopias made us cynical and incapable of poetry?
Kuba Dorabialski, August 2010