TarraWarra Museum of Art (TWMA) celebrates its tenth anniversary year in 2013 with the launch of the inaugural TarraWarra International 2013, exhibition Animate/Inanimate. Artists from around the world are creating haunting and beautiful works that consider the profound interconnections between diverse life forms (natural, animal and human). The exhibition includes installations, sound works, sculptural elements and video works by leading artists from Australia, the USA, India and China. The six exhibition artists are Allora & Calzadilla, US citizens based in Puerto Rico; Amar Kanwar who lives and works in New Delhi, India; Janet Laurence who lives and works in Sydney; Lin Tianmiao who was born in China and has lived in Beijing since her return there from the U.S in 1994; and Louise Weaver who lives and works in Melbourne. These artists explore the impact of global economic and climatic change on our natural environments and ask, can we find a ‘spirit’ in the inanimate? 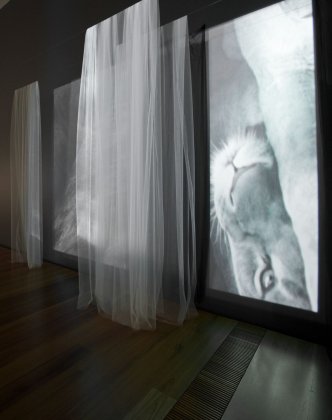